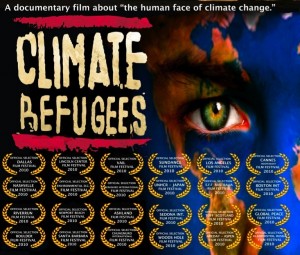 From The New York Times: “During the shooting of his 2010 documentary Climate Refugees, the Irish-American filmmaker Michael Nash visited nearly 50 countries in about 18 months, interviewing politicians, scientists, health workers and victims of floods, cyclones, hurricanes and droughts.”His conclusion was that short- and longer-term changes in climate are causing vast numbers of people to abandon their jobs, homes and countries to seek better lives elsewhere, or to simply survive….

“Mr. Nash poses a basic question: what will become of the millions of people whose lack of access to food and clean water leads them to take increasingly desperate measures? What type of strains will huge migration put on resources in more developed countries?

“Will this dislocation eventually, as the retired Navy vice admiral Lee Gunn told Mr. Nash, pose a threat to Americans’ national security, too?

“By focusing on the consequences of climate change rather than its scientific causes, some experts suggest that Mr. Nash succeeded in circumventing a divisive political debate over global warming and the extent to which human activity contributes to it.

“‘Whether it’s man or nature causing the climate to change, we still have to deal with islands going under water and people running out of food,’ Mr. Nash said….”